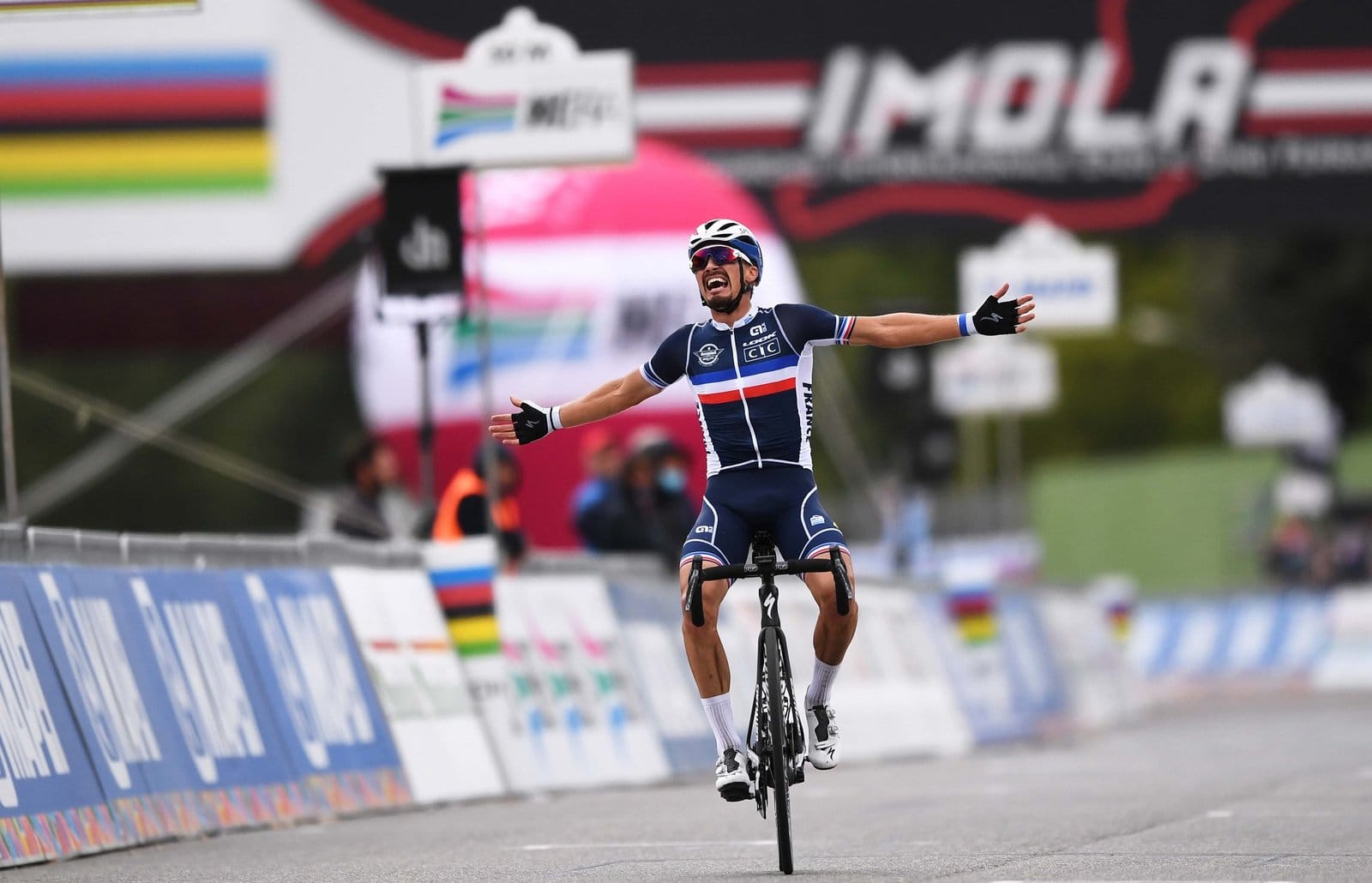 The route, predictions and contenders for the men’s road race in Flanders. Wout Van Aert, Mathieu van der Poel and Sonny Colbrelli are among the favourites to claim the rainbow jersey.

The rainbow jersey. One of the most coveted in pro cycling.

Julian Alaphilippe is the current holder of the rainbow bands after he won solo on the Imola race circuit last season. The Frenchman attacked with 12km remaining, and with the group behind largely leaning on Wout Van Aert — the best sprinter remaining — Alaphilippe was free to solo to victory. Van Aert sprinted to second with Marc Hirschi rounding out the podium.

All three riders could be contending again this year, despite the course occurring on contrasting terrain in Flanders.

The 268km course begins in Grote Markt, in the centre of Antwerp. After an 8km neutral section, a flat road carries the riders to Leuven over the following 56km. An early breakaway are likely to form in this phase of the race. Upon arrival in Leuven, the riders navigate the first of two distinct circuits that will make up the remainder of the race.

The 15.5km Leuven circuit is made up of four notable hills, all of which are short and steep. The circuit will be navigated one and a half times at this stage. With the riders entering Leuven from the north west, the first climb they'll tackle is the Wijnpers hill, which is 360m long and averages 8%. Next is the Sint-Antoniusberg ascent, which is short, narrow and partly covered by cobblestones. The other two climbs are the Keizersberg and the Decouxlaan climbs. The latter of the two is the most difficult and features percentages up to 14%. After one and a half laps around Leuven, the riders head directly onto the second circuit.

At 32.2km, the Flandrien circuit is almost twice as long as the Leuven circuit. Smeysberg is the first ascent of six gruelling climbs found here. The hill is 700 metres long and features a max gradient of 16%. Three kilometres later, the cobbled Moskesstraat occurs. With a max gradient of 18%, this is one of the most arduous sections of the race. The Bekastraat is next, which is short at 440 metres, but it's cobbled and features gradients up to 15%. Next, the riders pass through the village of Duisberg. The Veeweidestraat and a second ascent of the Smeysberg conclude the circuit. At this stage of the race, the circuit will be navigated once before returning to Leuven.

Upon entering Leuven for a second occasion, the peloton will tackle the 15.5km lap four times. This is followed by a second lap of the Flandrien circuit, before returning to Leuven for two and a half laps, which concludes the race.

The sheer length of the course combined with the bombardment of constant short hills make this a race of attrition. Although no climb is longer than 1km, we expect the race to be exceedingly selective.

Italy hosted the World Championships last year, but could only muster a top ten with Damiano Caruso. This year, they enter with one of the leading contenders in Sonny Colbrelli. Colbrelli has been in rampant form lately, winning the Benelux Tour as Italian Champion, before defeating Remco Evenepoel in Trento to become European Champion. The Italian wouldn’t have been the first name on any shortlist to win the World Championships at the beginning of the season, but this has comfortably been the most successful season of Colbrelli’s career. In the form of his life, could he cause an upset? The Italian squad also features Matteo Trentin — he may act as a dual leader by following early attacks.

However, the clear favourite for the road race is Wout Van Aert. The Belgian has all the skills to conquer the course and is one of the best sprinters in the peloton. This season, Van Aert has already won Gent-Wevelgem, the Amstel Gold Race, three stages of the Tour de France and a silver medal at the Olympic Games. He stepped away from racing after Tokyo 2020, before returning to his usual dominant form at the Tour of Britain. Van Aert won half the stages and the general classification, all but confirming his status as the favourite to become World Champion in Flanders.

However, Van Aert's form makes him a marked man from the beginning, which could be problematic. If he finds himself in a situation which mirrors the World Championships last year — in a reduced group with a dangerous rider up the road — he’ll be heavily leant upon to chase. Others may refuse to ride with Van Aert, knowing the danger he poses in a sprint finish. This means Van Aert's Belgian teammates have a critical role to play. The likes of Remco Evenepoel, Jasper Stuyven and Yves Lampaert are capable of winning in their own right. They must cover attacks from other teams or work for Van Aert to avoid putting their leader in an awkward situation. The best way to do this could be to send Evenepoel and others on the attack, ensuring Belgium stay on the front foot. The strategic choices Belgium makes, and whether they ride defensively or offensively, are critical in how the race unfolds.

Many billed this as a battle between Van Aert and Mathieu van der Poel as soon as the Flanders '21 parcours were released. However, The 2020 Tour of Flanders winner has struggled with back issues since Tokyo 2020 after he crashed in the mountain bike event. He returned to road racing for the first occasion in more than two months at the Antwerp Port Classic, where he won. He hasn’t demonstrated recent form to the level of Wout Van Aert, but it’s a promising sign after fitness concerns. Aside from Van der Poel, the Netherlands have a versatile squad with the likes of Mike Teunissen and Bauke Mollema. Teunissen has been in consistent form since the Tour de France, finishing on the podium at both the Tour of Denmark and the Tour of Norway, making him an outsider to watch.

Team GB enter the World Championships with a variety of options, but Tom Pidcock looks to be team leader. He won Brabantse Pijl earlier this season, which occurred on notably similar ground. Naturally, this makes Pidcock a contender. His form waned at the Vuelta a España, although he improved as the race went on — he may have timed his preparation suitably for Flanders. Elsewhere, Ethan Hayter could be a great option for Great Britain. Hayter was a close second to Wout Van Aert at the Tour of Britain and has won at the Tour of Norway, Volta Algarve and Vuelta a Andalucia this season.

We have made it some way into the contenders section without mentioning the defending champion. Julian Alaphilippe won on different terrain last year — the climbs were less frequent, but longer. The Flanders course features a plethora of hills, though, meaning Alaphilippe must be considered. Loulou demonstrated that he can mix it up with Van Aert and Van der Poel on Flandrien terrain at the 2020 Tour of Flanders, where he followed the duo over the major difficulties before colliding with a moto. Alaphilippe isn’t France’s only option, though. Look out for Benoît Cosnefroy, who won the Bretagne Classic recently ahead of Alaphilippe, before finishing third at the European Championships in Trento.

Denmark head to Flanders with impressive strength-in-depth. Defending Tour of Flanders champion Kasper Asgreen leads, though he isn’t their only option. Magnus Cort had an electric Vuelta a España with three stage wins, although only one of his 21 pro victories have come on Belgian soil — stage 5 of the BinckBank Tour in 2018. Mads Pedersen is another option for Denmark — he’s a fast finisher, so would be particularly dangerous from a reduced bunch. Mikkel Frølich Honoré could be Denmark's wildcard. The Deceuninck - Quick Step rider was Julian Alaphilippe’s primary lieutenant at the Tour of Britain, confirming the fine form which earned him podiums at the Bretagne Classic and Clásica San Sebastian.

When Primož Roglič and Tadej Pogačar are present, you can never count out Slovenia. We have rarely seen the duo tackle cobbles before, which makes them something of a wildcard. However, Matej Mohorič is more accomplished on cobblestones — he won the queen stage of the Benelux Tour earlier this month. He’s also proven to be highly adept at competing over long distances, so the 268km course works in his favour.

Other riders to keep an eye on include Marc Hirschi, Nils Politt, Peter Sagan, Michael Matthews and Michał Kwiatkowski. 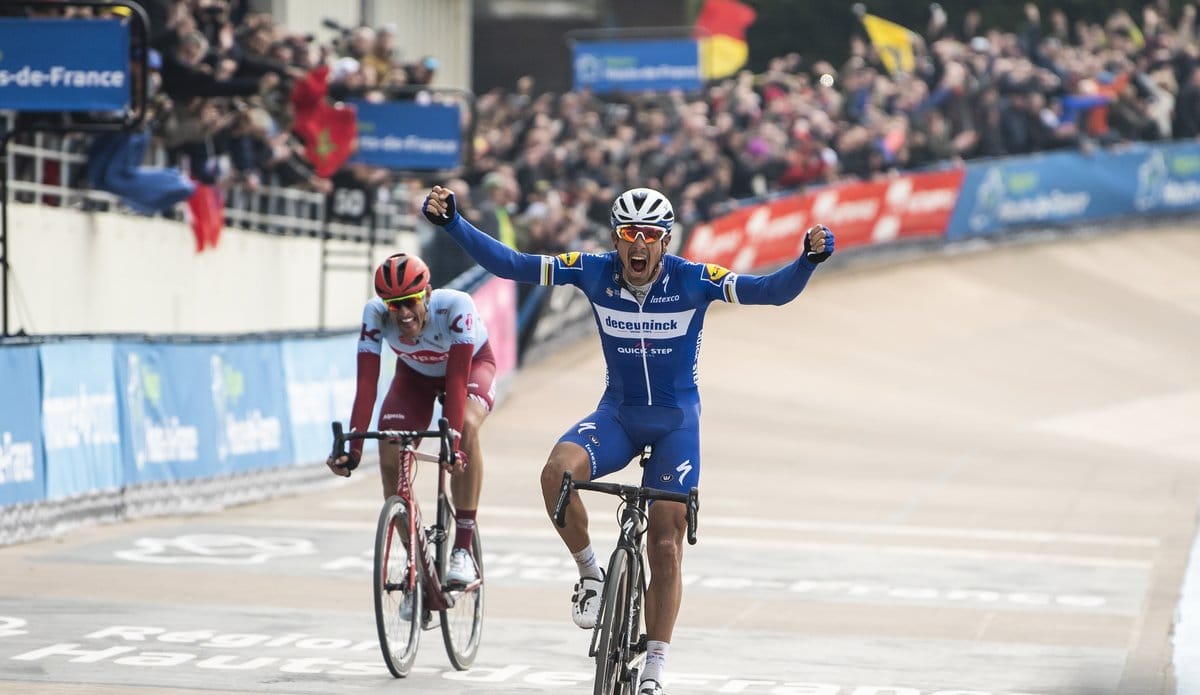 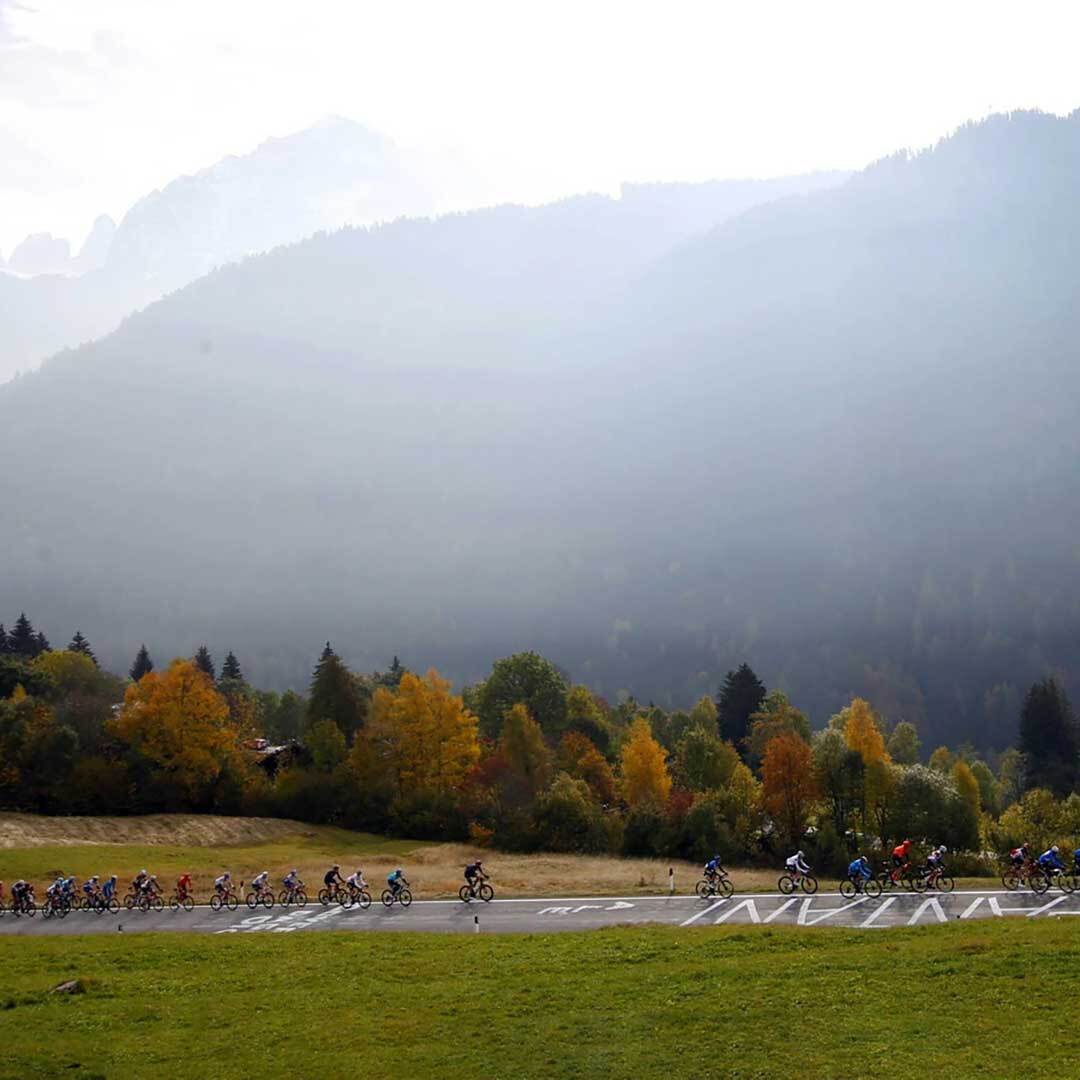